Where is Your Anxiety Coming From?

https://king.ie/SwitchingFEAR is an acronym for

All Your Anxiety comes from fear.

Fear can come from various sources. It can be triggered by

So how do we counteract the constant stream of negativity and scare mongering that bombards you and makes uou and your children feel unsafe, worried, anxious and stressed?

I believe we can deal with it in the  same way I deal with every stress – find the root cause of your distress and fix that first,  then you won’t have the worries, the anxiety or the stress as these melt away!

Anxiety is just a symptom of distress and would remind me of those warning lights that come on the dashboard of your car to say something is not right in the engine. You can unplug the bulb or smash it but the problem remains the same and unless you fix it you are just tinkering with the bulbs on the dashboard. You’ll need a proper mechanic to look at  your engine and fix it- which in this case is your brain or more specifically – your thinking and the mindset you hold!

When I work with you in a private session in my clinics or on the phone to switch off your anxiety I’ll listen to you  attentively and with compassion, then I will zero in on the big shock or stressful event that shook your self-confidence and drove you into a primitive fear mindset that created your worries, fretting, stress and anxiety!

Then I help you to deal with your traumatic event with a few simple activities and a special visualisation that calms and resets your fear mechanism inside!

Soon you regain your self confidence and self assurance and peace of mind.

In my presentation on Wednesday at 7:30pm in The Hive, Carrick on Shannon I’ll be Switching off the anxiety ofeverybody who attends! To book your place(s) click https://king.ie/Switching 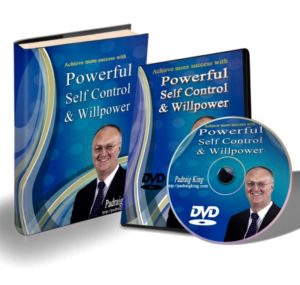 Self Control and Willpower Live Training with Padraig King